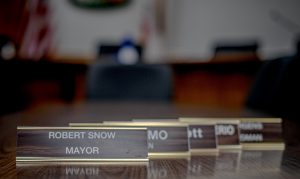 The City’s elected Officials and Staff have been entrusted with the responsible stewardship and financial management of the resources belonging to the community.  As such, to sustain consistency, growth and quality of life within our community, City Officials and Staff are committed to positive long-range planning, effective management of resources, transparency, safety, and are receptive to innovative ideas.  The goal is to promote efficient, effective and proactive programs, and focus on a vision to move the City forward towards a positive future.

The City of Corning's vision is: 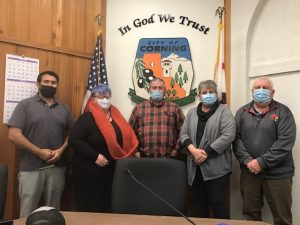 The Corning City Council consists of Mayor Robert Snow, Vice Mayor Dave Demo, Karen Burnett, Jose “Chuy” Valerio and Shelly Hargens, who have been elected by the citizens of Corning as their representatives to make the legislative and policy decisions of the City.  They are subject to the provisions of City Ordinances, Resolutions, Government Code and the Constitution of the State of California.  The Mayor and City Council members also serve as City representatives on various Committees/Commissions and represent the City at official functions.

City Council meetings are held the second and fourth Tuesdays of each month at 6:30 p.m..

The registered voters elect the Mayor every two years, and the City Council members are elected to four year terms that overlap with the Mayor's term.

The City Manager is appointed by the City Council and implements Council Policy.  The City Council also appoints members to the various City Commissions (Planning, Airport, Recreation, and Library).